Now, we may repeat the process for more examples and may get the formula of (a+b)^2.

Now, after getting the formula, our goal is to prove it. The proof of this formula is more than simple!! We can prove it as: 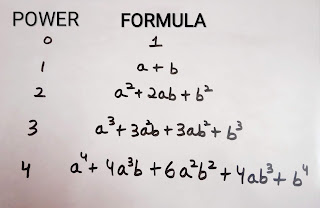 Hey!!
Look what we have!!  It’s nothing but Pascal’s triangle. This is a triangle discovered by Pascal in which the top most element is 1 and then by taking the sum of the two elements, we can find the next term as shown below:
1+1=2, write it below
2+1=3, write it below
And so on!!
Now, we can easily find the next row of this triangle and can find the formula for (a+b)^5 by using the above observations.
Ok, so we have found a way to find the formula for any power.
But what if we want to find the formula for (a+b)^9 or (a+b)^19 ?
So we have to extend the triangle upto 9 or 19.
Hey!! this is really a lengthy and boring method!!
So, now our purpose is to find the desired row of Pascal’s triangle.
How?
Let’s look at the pattern again!!
If we see the marked portion, 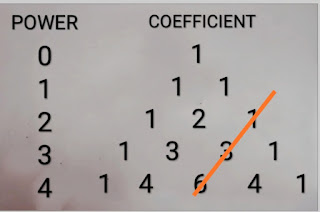 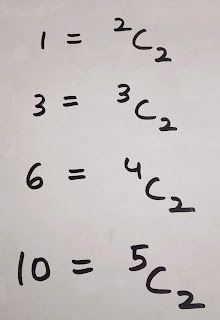 So, we can easily find the nth term by using the combination formula.
Now let’s look at the other marked portion: 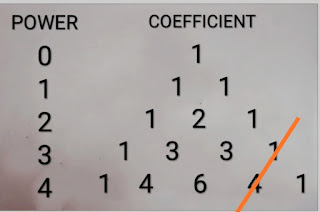 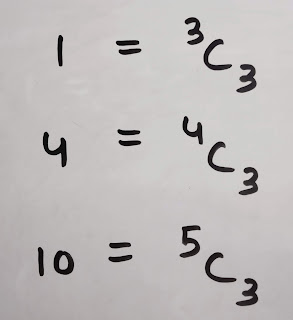 Now, we are almost done!!!! Let’s write the Pascal’s triangle in terms of combination notation: 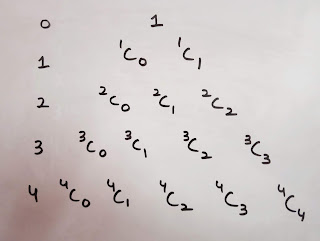 Now, we can easily find any row of Pascal’s triangle as: If power is n, then the row is:

And hence we can easily find the formula for any higher power!!
Did you know this is nothing but Binomial theorem
Now, we may define the Binomial theorem as:
For any positive integer n,
We have:

Now, if talk about the general term, for example if we want to find out the 4th term of the binomial expansion (a+b)^5, then we can easily found it as

So, here 3 is used commonly in the above formula and 3 is 4-1.But for finding the general term, we don’t write it as r-1 (for the rth term) because it will get more complicated. So, instead we write
The general term as

these keywords are searched for our blog:

10 thoughts on “ALL ABOUT THE BINOMIAL THEOREM”